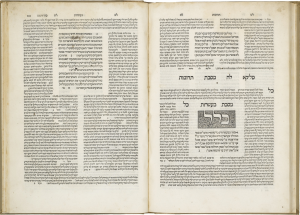 While I was at the [Ethics of Equality in Education] conference, I stayed at the Jewish Theological Seminary, where young rabbis- I think they were Orthodox- were studying. Since I have a Jewish background, I knew some of the things they told me about the Talmud, but I had never seen the Talmud. It was very interesting. It’s got big pages, and in a little square in the corner of the page is the original Talmud, and in a sort of L-shaped margin, all around this square, are commentaries written by different people. The Talmud has evolved, and everything has been discussed again and again, all very carefully, in a medieval kind of reasoning. I think the commentaries were shut down around the thirteen- or fourteen- or fifteen-hundreds- there hasn’t been any modern commentary. The Talmud is a wonderful book, a great, big potpourri of things: trivial questions, and difficult questions- for example, problems of teachers, and how to teach- and then some trivia again, and so on. The students told me that the Talmud was never translated, something I thought was curious, since the book is so valuable.

One day, two or three of the young rabbis came to me and said, “We realize that we can’t study to be rabbis in the modern world without knowing something about science, so we’d like to ask you some questions.”

Of course there are thousands of places to find out about science, and Columbia University was right near there, but I wanted to know what kinds of questions they were interested in.

They said, “Well, for instance, is electricity fire?”

They said, “In the Talmud it says you’re not supposed to make fire on a Saturday, so our question is, can we use electrical things on Saturdays?”

And then one day- I guess it was a Saturday- I want to go up in the elevator, and there’s a guy standing near the elevator. The elevator comes, I go in, and he goes in with me. I say, “Which floor?” and my hand’s ready to push one of the buttons.

Well, this really bothered me, so I decided to trap the students in a logical discussion. I had been brought up in a Jewish home, so I knew the kind of nitpicking logic to use, and I thought, “Here’s fun!”

My plan went like this: I’d start off by asking, “Is the Jewish viewpoint a viewpoint that any man can have? Because if it is not, then it’s certainly not something that is truly valuable for humanity… yak, yak, yak.” And then they would have to say, “Yes, the Jewish viewpoint is good for any man.”

Then I would steer them around a little more by asking, “Is it ethical for a man to hire another man to do something which is unethical for him to do? Would you hire a man to rob for you, for instance?” And I keep working them into the channel, very slowly, and very carefully, until I’ve got them- trapped!

And do you know what happened? They’re rabbinical students, right? They were ten times better than I was! As soon as they saw I could put them in a hole, they went twist, turn, twist- I can’t remember how- and they were free! I thought I had come up with an original idea- phooey! It had been discussed in the Talmud for ages! So they cleaned me up just as easy as pie- they got right out.

Finally I tried to assure the rabbinical students that the electrical spark that was bothering them when they pushed the elevator buttons was not fire. I said, “Electricity is not fire. It’s not a chemical process, as fire is.”

“Of course, there’s electricity in amongst the atoms in a fire.”

“And in every other phenomenon that occurs in the world.”

I even proposed a practical solution for eliminating the spark.

“If that’s what’s bothering you, you can put a condensor across the switch, so the electricity will go on and off without any spark whatsoever- anywhere.” But for some reason, they didn’t like that idea either.

It really was a disappointment. Here they are, slowly coming to life, only to better interpret the Talmud. Imagine! In modern times like this, guys are studying to go into society and do something- to be a rabbi- and the only way they think that science might be interesting is because their ancient, provincial, medieval problems are being confounded slightly by some new phenomena…

I studied physics in college but found myself reading a lot of Russian literature.

I was awestruck by the insights into human behavior offered by writers of great fiction, especially the penetrating psychological studies Fyodor Dostoevsky made of his characters. Reading his examinations of human motivation and religious belief at an impressionable age was one of the most educational experiences I've ever had.

A few years after I graduated, I read an obituary of Anthony Powell in the N.Y. Times. I decided to read his magnum opus, A Dance To the Music of Time. I was mesmerized by Powell's command of the English language and his astute observation of human maneuvering amidst rigid social mores. Reading Powell convinced me there is a truth in great works of fiction unattainable in other endeavors of man.

This website is my effort to showcase great writing found in literature, biography, science, and historical studies. Enjoy!